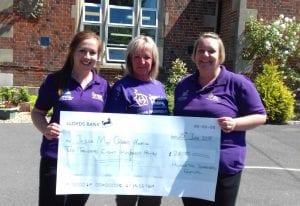 A popular Wiltshire scarecrow festival has raised £2,800 for Jessie May, the children’s hospice at home charity providing care for terminally ill young people across the county.

The annual Hilmarton Scarecrow Festival was a roaring success, bringing together hundreds of residents and visitors, and 46 scarecrows, to the village last month.

The event raised over £8,000 for local causes including Jessie May, during two family fun days of creative scarecrow building to this year’s theme of ‘Pairs’.

Mary Spooner, Treasurer of the Hilmarton Scarecrow Festival Committee, said: “We’ve had another amazing year and were so impressed by everyone’s scarecrow-building efforts!

“We hold the festival to raise money for our local school, pre-school and church, but also choose a charity connected to the village to support each year.

“I already knew of Jessie May and the incredible work their nurses do in the homes of life limited children, and so this year we decided they were definitely worthy of raising money for. A few of the Jessie May nurses even built their own ‘Doctor and Nurse’ scarecrow pair – and did a great job too!

“The festival was wonderful as always, and this year we added new cryptic clues to go alongside the scarecrows on the trail. Entry to take part in building the scarecrows and take on the scarecrow village trail helped raise the fantastic amount we did, as well as a raffle, BBQ, tombola and cake sale. It was truly a wonderful day for the whole family, especially with the sun shining.

“Many thanks to everyone who has supported us this year, including the scarecrow-builders, festival-goers, volunteers and the local businesses who sponsored scarecrows.”

Now in its fifth year, the Hilmarton Scarecrow Festival continues to be a highlight for the village and surrounding communities. Next year’s festival theme will be revealed in January.

Debbie Clark, Swindon and Wiltshire Fundraising Officer at Jessie May, said: “This is such a wonderful gesture and we are overwhelmed at the committee’s incredible achievement.

“The money raised will make such a tremendous difference to the work we do here in Wiltshire helping local children and their families. Thank you to everyone involved – we are truly appreciative of your support.”

The money raised during the festival has been distributed between Jessie May, Hilmarton Primary School, Hilmarton Preschool and St Laurence Church.