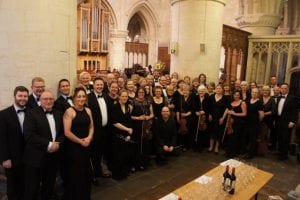 A concert of popular classical music to immerse you in American culture and film music.

Dvorak – Symphony No 9 ‘From the New World”

George Gershwin – ‘An American in Paris

From Devizes Books or www.wco.org.uk, or on the door.

Tim Harrison (conductor) says ‘We hope this programme of familiar classics transports you to this great country.  In the first half is Antonin Dvorak’s romantic symphony -the New World – depicting his impressions after he moved to America at the age of 51 and composed this final symphony. Very well-known it has beautiful flowing themes and also influenced by traditional American folk melodies.

The second half features music from the twentieth century and composers’ take on American culture where Western Classical music interweaves with Jazz influences. It includes the Mambo dance from Bernstein’s West Side Story, which showcases both Latin American rhythms with Jazz harmonies This is followed by the highly energetic American in Paris Suite by Gershwin. And the concert concludes with the Cowboys Overture by John Williams. Both the narrative of the Cowboys film is present, as well as the depiction of the vast barren landscape seen in Western movies. Come and join us “Yeeha!”