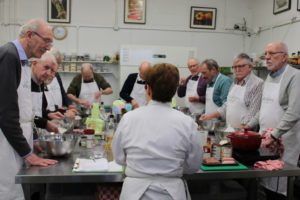 The course was organised by Carer Support Wiltshire thanks to funding from NHS Property Services and Carers Trust.

“Older male carers are less likely to seek support when they need it and are more likely to be socially isolated and lonely than their female counterparts,” says Carer Support Wiltshire’s Community Fundraising Officer, Rachael Demery. “When the opportunity to fund an activity designed to bring older carers together became available I jumped at the opportunity and applied to run a cookery workshop.”

Taking on a caring role often involves additional domestic duties, cooking included, and many senior male carers, who may have had limited cooking experience prior to their caring role, can struggle to prepare healthy, nutritious meals on a daily basis. The day was intended to improve the attendees’ cookery skills but, as importantly, to give the carers a break from their caring role and the opportunity to meet other carers, enjoy themselves and feel involved in the community. 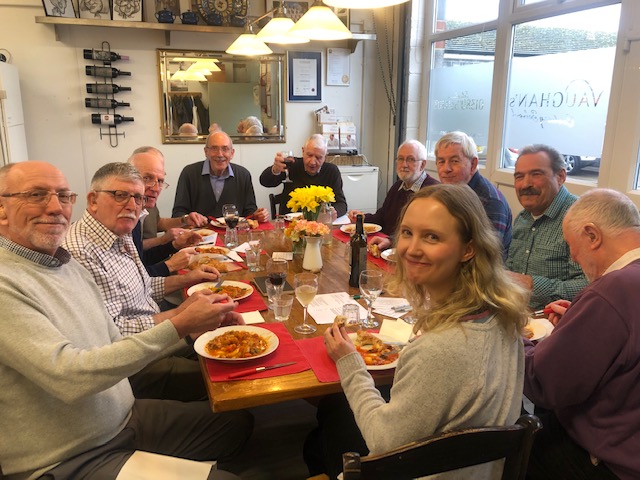 “As my wife’s Alzheimer’s has deteriorated she now requires 24/7 care and I have had to resign or withdraw from all the non-caring activities I had been involved in,” says one of the course attendees David Walker, from Melksham. “Last week’s cookery course was the first ‘social’ activity I have been able to attend in the past 12 months. I have no doubt that I am not the only carer in this situation.”

Tom McGowran, Marlborough has cared for his wife, who has Muscular Dystrophy, for 15 years. He says: “The course was a lot of fun – ten male carers over 65 all enthusiastically taking part. Who would have believed that within three hours each of us would have made bread, a casserole and a cake, then were able to sit down and eat it.

“A week on I have tried out the casserole with great success. I’m now charged with having to make it once a week! It has given me confidence to try some new recipes.”