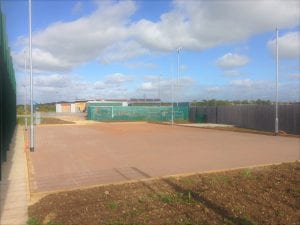 The community of Royal Wootton Bassett, Wiltshire is celebrating the news that The Upper Thames Boules Club has received a substantial funding boost from Crapper & Sons Ltd. The money has been made available through the Landfill Communities Fund (LCF) which is administered for Crapper & Sons Ltd. by Community First, the Rural Community Council for Wiltshire.
This money has been used to build a pétanque (boules) terrain at the Gerard Buxton Sports ground which is situated near Coped Hall roundabout. Royal Wootton Bassett Sports Association was founded in the 1930’s, following the gift of land from a local benefactor, Major Gerard Buxton, for sporting use. The Association recently completed relocation from the original 7 acre site, enhancing that legacy to a 23 acre community sports site offering football, tennis, and cricket facilities. RWBSA is voluntary run, and the site is home to the Town’s football, tennis, cricket and road running clubs, together with offering sporting facilities to many wider community groups such as local schools and clubs.
RWBSA mission is to provide affordable sporting facilities and opportunities to both its member clubs and the local community, therefore the addition of UTBC to its member clubs further delivers on that mission.
The Upper Thames Boules Club (previously Minety Petanque Club) has been in existence for over 20 years and were until recently located at the Foresters Arms in Leigh but needed to relocate due to development of the site at Leigh. The club has been welcomed by Royal Wootton Bassett Sports Association and space has been allocated to provide 8 pistes which will allow up to 50 players at any one time.
French in origin, Pétanque (also known as Boules) is now played right across the world and is one of the most inclusive sporting activities available, we do not discriminate against age, sex or disability. Played with hand-sized hollow metal boules on various types of dirt or gravel surfaces (terrains) the object of the sport is to get as many of your teams boules closer to a small wooden ball (jack) than the boules of your opponents during each end. Any boule of one team that are nearer to the jack than any boule of the opponent’s counts for one point each. The winning team in a game is usually the first to reach 13 points. Petanque has also been put forward as a new sport for the 2024 Olympics in France and a decision is awaited.
The Upper Thames Boules club were 2017 winners of the Costwold Pétanque League and provide players for the regional team of the Great Western Region.
The club will move to Royal Wootton Bassett during the winter and will be arranging some come and try events in 2018 for anyone interested in learning the sport. Anyone interested can contact the club either through the website at www.utbc.co.uk or by email to alanmcinnes@foodsolutions.co.uk