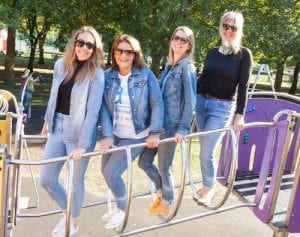 Wiltshire charity Alzheimer’s Support is asking everyone to pull on their jeans in October in its first Denim4Dementia fundraising event.

Schools, businesses, and community groups across Wiltshire are lining up to stage denim-themed mufti days during October.

Alzheimer’s Support fundraiser Rachel Fear, who dreamed up the month-long campaign, said: “We have had a lot of interest but we still need more groups and businesses to get involved. Apetito in holding a denim day in Trowbridge. Wiltshire Heights Care Home in Bradford on Avon is hosting a fashion show and a couple are doing a denim three-legged sponsored walk – so there are lots of extra ways to get involved.”

Alzheimer’s Support supports more than 1,000 people each month in Wiltshire. It runs day clubs, a network of singing, movement and art groups and a highly personalised one-to-one support service which was last year named the best dementia team at the national Dementia Care Awards. It needs to raise £300,000 a year to keep services running.