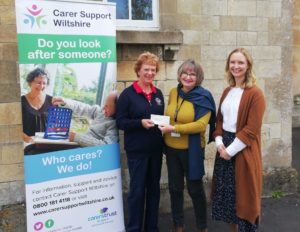 Many of Wiltshire’s unpaid carers won’t have any time for themselves this Christmas as they juggle the demands of family responsibilities, work and caring for a loved one.

Carer Support Wiltshire’s Time for Carers Appeal, now in its third year, aims to raise £30,000 to give unpaid carers a break.

Many carers are unable to take time away from the person they care for on a regular basis and some may have gone years without a break. They may be unable to leave their loved one alone as they need constant monitoring or supervision, and constantly worry about what could happen to their loved one if they do.

“Carers save the UK economy £132 billion every year – nearly the cost of a second NHS; they care for others but often at a high personal cost to themselves,” says Rachael Demery, Carer Support Wiltshire’s Community Fundraising Officer.

“The aim of our Time for Carers Appeal is to help those most in need of a break – the carers who have fallen through the gaps in service provision, or where it is clear that an existing funded service is not sufficient to meet the carer’s respite needs.”

A recent study carried out by Carers UK(1) showed that only 8% of carers felt they were able to take sufficient breaks.

50% of unpaid carers said they would use a break to catch up on sleep and a third (33%) said they would attend their own medical appointments. 38% of carers who are unable to take a break said it was because they can’t afford replacement care.

Taking regular breaks has been shown to help carers feel happier, healthier and more in control of their lives. They are less lonely, isolated and anxious and more able to carry on caring for themselves and their loved ones. More importantly the respite and time out funded for them by Time for Carers ensures they feel recognised by the wider community for the vital support they provide and their enormous contribution to society.

Claire* was in crisis at the end of 2018 when she was let down by a care company and left with no one to help look after her mother, who needs round the clock care, just before Christmas. CSW was able to fund five days in a hotel on the coast for Claire, her husband and her mother to help them recharge and recover from a very stressful time.

“I was very tearful every day and felt isolated and trapped. I wanted to just run away,” says Claire. “I didn’t want to be separated from mum so it was wonderful to be given the chance to go away with her to a place with adapted accommodation.

“It gave us all a break from the same four walls where we had been arguing from the stress of the situation. It also gave me the chance to think about what I was going to do and time out to clear my head. It wasn’t just about the money either – it was the fact I was being recognised as a carer and made to feel valued.”

The charity is thrilled to have raised almost £10,000 for the appeal but are calling on local groups, clubs, organisations and individuals to help them reach their target.

“From Christmas charity balls to mince pie bake sales – there are lots of ways to raise money for carers,” says Rachael. “Perhaps set yourself a personal challenge and, whatever you love to do or want to do, turn it into an amazing fundraiser.”

To donate, search for ‘Time for Carers’ on www.justgiving.com. You can contact the CSW fundraising team at fundraising@carersupportwiltshire.co.uk.

*not the carer’s real name

(1) Carers UK, 2019, ‘Give Us A Break’ https://www.carersuk.org/images/News__campaigns/GiveUsaABreak_Aug19_FINAL.pdf

Photo: Chris, the Ladies Captain from Chippenham Golf Club presenting CSW Chief Executive Judy Walker (middle) and Rachael Demery (right) with a cheque for £910 for the Time for Carers Appeal. The money was raised from an event and raffle.