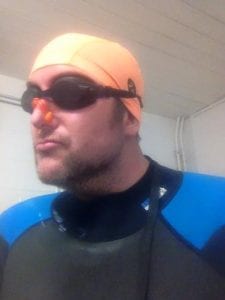 The feeling I had standing over that cold solitary lake for the first time was overwhelming. I truly did not know how my body would cope or whether I would be able to climb out at the end of the session.

I was there because of my son Tylor, who we lost, age 17, three years ago. Grief is a horrid and personal thing that can so easily bring you down. Our lives collapsed when he died. He was, is, our all. But through the grief, somehow, I thought that as soon as I was strong enough I would do something for the Make a Wish Foundation, which as an important charity for us and Tylor.

As a child I used to swim in a small stream near Box, in Wiltshire. But due to work and family life, swimming had tailed off over the years. I had always thought that learning to swim was a good idea in case I was ever called upon to save a life. Little did I know it would be mine.

Tylor was our first born. Throughout the pregnancy we did not know if he would survive. He had his first surgery when he was just a few days old, followed by many more operations at the John Radcliffe in Oxford due to his double-inlet left ventricle and other complications. We nearly lost him to epilepsy when he was five and then, when he was 10, his spine started to twist and he ended up wearing a full upper body brace 23 hours a day and had to have spinal surgery twice. However, he rarely complained. His spirit of “get on with it and make the most from life” was always so strong.

I started to train and wanted to swim the length of Windermere in 2015. I had watched Kev Brady’s Windermere swim and thought I could try it. But I was still low and fell ill, which put that plan on hold. Instead, and with Tylor’s spirit pushing me on, I decided to organise a sponsored swim in our local pool. I started at 6:30 in the morning and swam non-stop until 4pm, covering more than 11 miles. The swim was a great personal achievement but more importantly it brought together friends, family and strangers and we raised just under £3,000 for Tylor’s charity, which they will use to create smiles and everlasting memories for children with life-threatening illnesses. When you lose a child, it’s all the happy memories that pull you through the dark places of grief, and that’s why it’s so important.

Following my pool swim, I followed Kev Brady’s swim along the length of the River Severn. Inspired by the good he achieved, I knew I must try again for Windermere. Until this point I could not swim front crawl so I set about teaching myself and from September to November 2015 went from struggling to do 25m to doing two-hour sessions in my local pool. I also joined an outdoor swimming club – The Cotswold Open Water Swimmers (or COWS) – and started training at Lake 32. My first swim there was in 6.8-degree water! I’m pleased to report I could climb out at the end.

Going into 2016 I was swimming between 8 to 10km per week and regularly visiting the lake so my fitness was greatly improving and I’m all set to have a crack at the length of England’s longest lake later in the year.